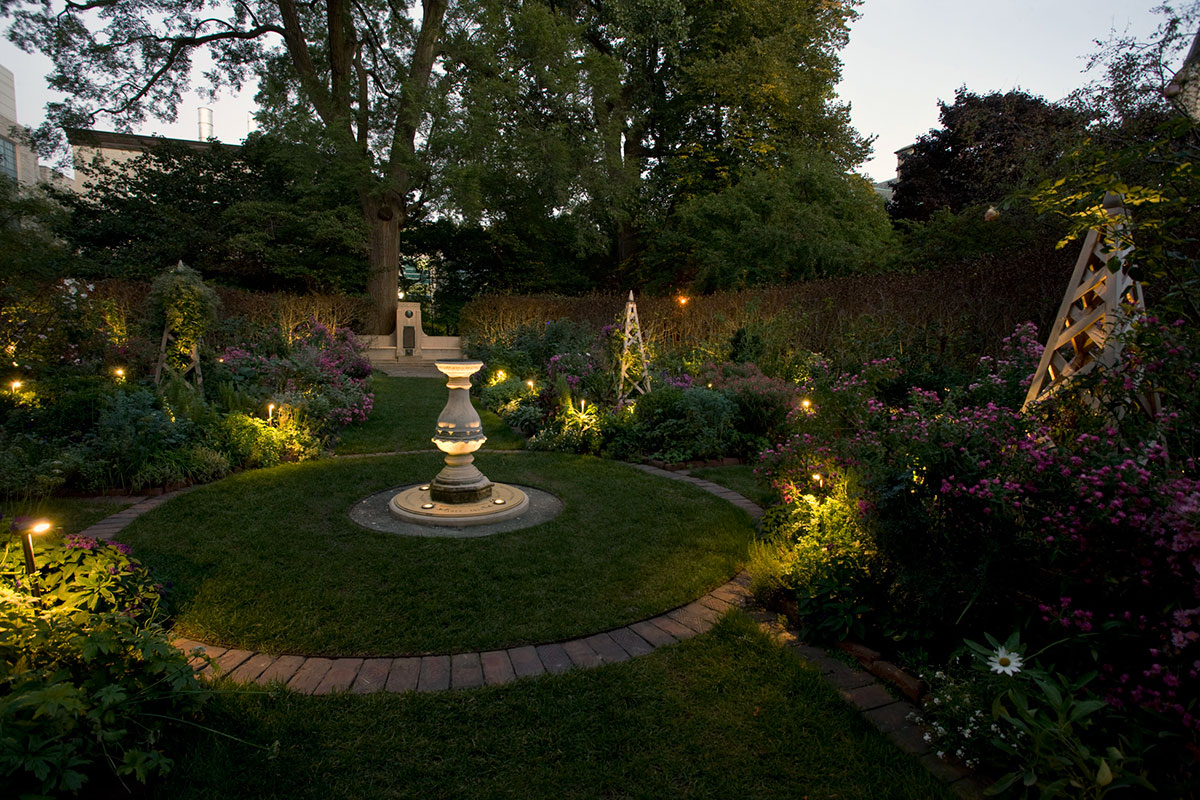 With the lighting design Inspired by a scene from a Midsummer Night’s Dream, the Shakespeare Garden on the campus of Northwestern University (NU) now features beautiful LED path lighting from Auroralight—specifically the Maglio LMG1-90s. For the first time in its century old history, visitors can enjoy the garden after dark.

Last year, The Garden Club of Evanston received a special gift of $100,000 from Northwestern University in honor of the club’s 100th anniversary and the centennial of the garden’s creation in 1915. The garden was originally established to commemorate the 300th anniversary of Shakespeare’s death in 1616. Now, 100 years later, the University’s generous gift allowed the club to make significant improvements in the garden as a multi-pronged project, including its first-ever lighting, a long-held goal. 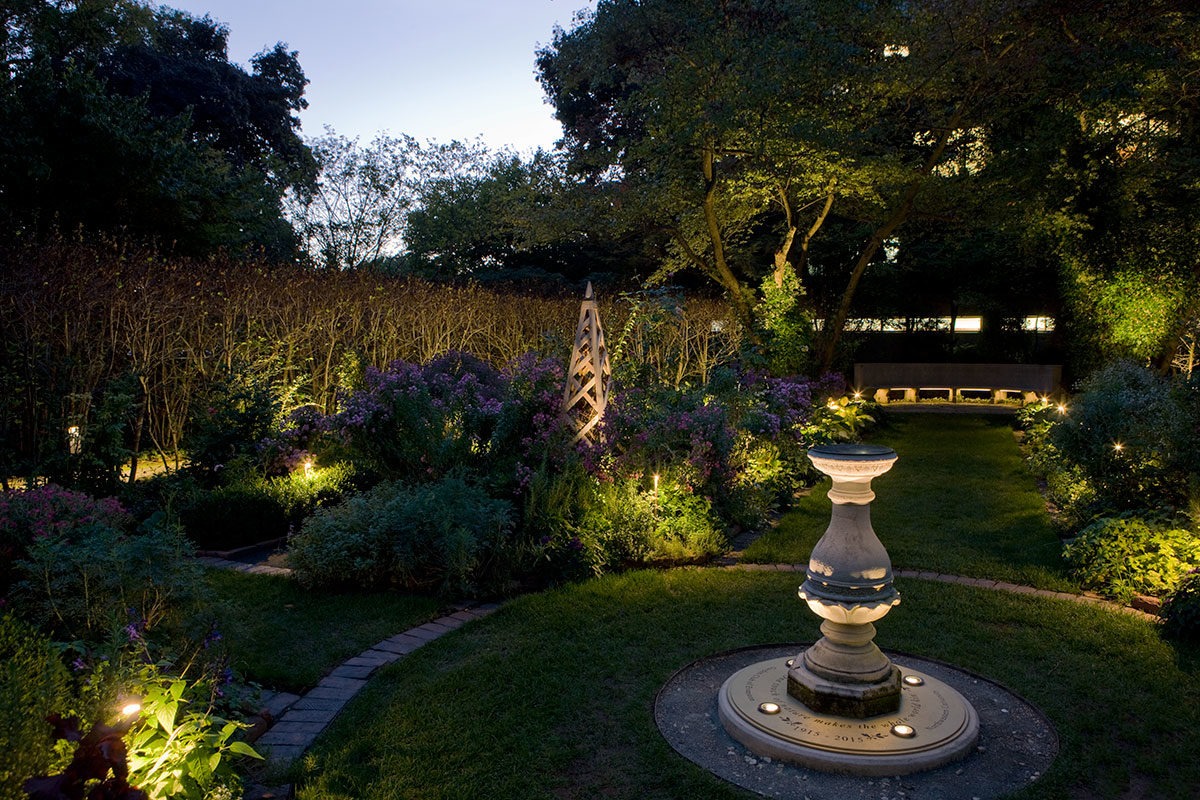 “From the moment we heard acclaimed Chicago Lighting Designer Peter Hugh’s vision for the garden’s lighting plan, we knew we wanted that for the Shakespeare Garden,” says Claudia Lane, president of The Garden Club. “To create a magical scene at night, the lighting had to create a glow, with pools of illumination playing against the mysterious shadows in the space. But during the day, the lighting had to be unobtrusive and harmonious with the subtle palette of colors in our classic English garden. We are also a public space on the campus, so the lighting had to be durable and not require ‘babying’. We are very happy with the choice of the beautiful solid brass and copper Auroralight fixtures,” she says.

Peter Hugh drew upon his theater background for the lighting design. “I wanted to use lighting that was representative of the fairies coming out at night as seen in Midsummer Night’s Dream,” he says. “To make this vision a reality, I had to get the University to rethink what value fixtures are. Real value is seen in longevity, better performance, and less maintenance over time vs. the lowest upfront cost,” he explains. 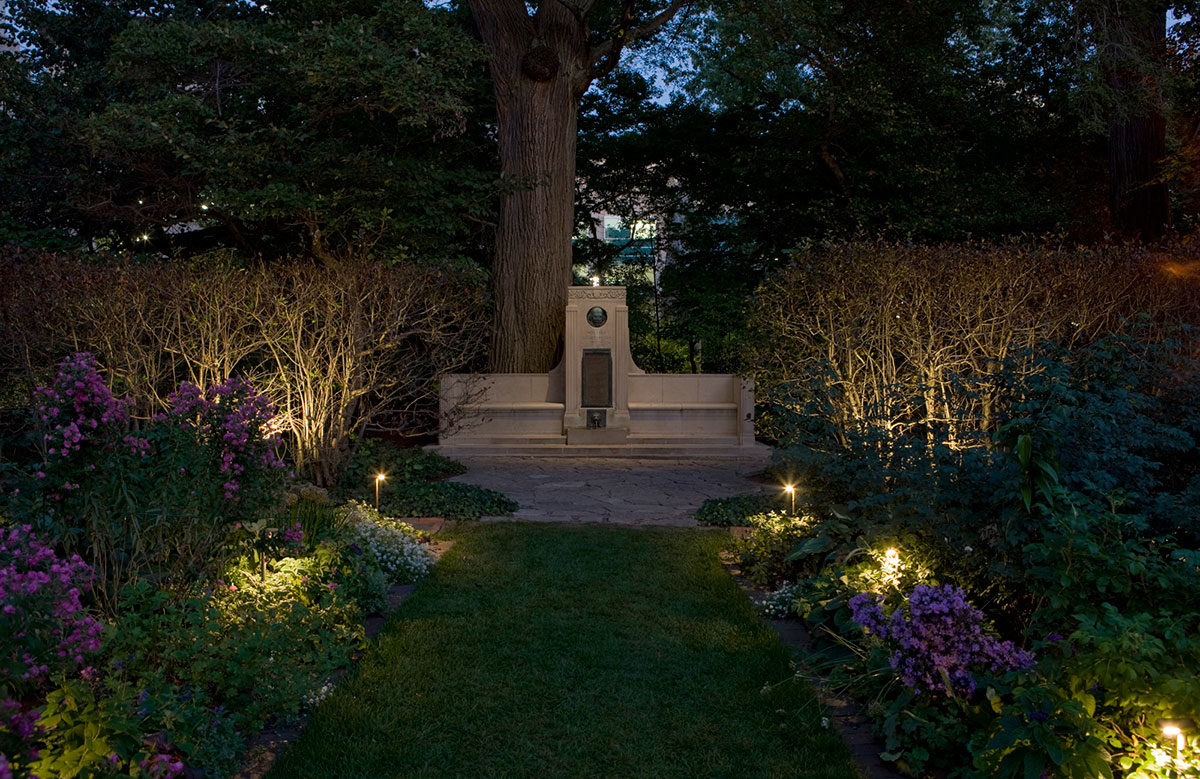 With the help of Andy Siegel, Senior Specifications at Archibald & Meek, a Chicago-based lighting rep, Hugh brought in samples of Auroralight’s Maglio LMG1– 90s for LED path light use, and created mock-ups that were also shared with the landscape architect, Hitchcock Design Group. “We let the staff at Northwestern hold the fixtures in their hands so they could appreciate the quality in workmanship and the beauty found in the use of solid copper and brass,” explains Hugh. “They loved the look of the Maglio and when I talked about its outstanding performance, use of energy saving LED technology and the lifetime warranty, they were completely on board with our choice of Auroralight!”

The Maglio LMG1-90 is powered by a single, 2.5 Watt, high performance LED in 2700, 3000, or 4500K color temperatures (80 CRI typ.).  Its light output is profuse, yet allows the designer to manage direction for a glare-free presentation with the use of its rotational glare shield and dimming capabilities. This contemporary luminaire is manufactured from solid copper and brass, is offered in four different finishes, and is assembled with stainless steel hardware and hermetically sealed with silicone O-rings. It is a popular choice for path lighting because of its sleek silhouette that seamlessly blends into the surrounding landscape. The Maglio LMG1-90 comes standard in 12, 18 and 22” heights with a wide variety of mount options from which to select.

Hugh also specified four of Auroralight’s LMWL LED micro well lights to highlight the focal points of the fountain and sun dial. At a mere 3 Watts, this diminutive luminaire provides the designer with a variety of inspired options to ensure the desired effect. It is available in three beam spread options – 10° narrow, 25° medium or 40° wide, and three standard color temperatures in 2700, 3000 or 4500K (80 CRI typ.). The LMWL also dims to less than 10% typ. and is compatible with standard TRIAC dimming systems. Machined from solid brass, it comes with six faceplate selections, which include brass, stainless steel, round, square and others. It’s also rated for interior and exterior use making it possible to illuminate a diverse range of architectural features to create design continuity throughout the project.

Overall, the 70’ x 100’ sf garden features 40 path lights, four well lights and another LED fixture mounted on a tree by a tree strap to create a moonlight effect illuminating a statue of William Shakespeare and the fountain.

“Using Auroralight was an easy choice for me,” says Hugh. “We have peace of mind knowing that if something goes wrong, we are working with a company that will take care of it and that means a lot to us.”

Seigel also appreciates how the fixtures speak for themselves during client presentations. “Their light distribution, color temperatures, adjustability, versatility, and sustainability are all major factors in why I try and get them specified whenever I possibly can.”

Claudia Lane adds, “We feel that Shakespeare himself and the original landscape architect Jens Jensen, along with the “ladies of the club” who founded the garden 100 years ago would be happy, too. The garden, which is on the National Register of Historic Places, is now ready for its second century with the ‘dream’ of illumination achieved!”